BUBBLE is the high altitude balloon program of KSat. The main objective of the program is to enable the cost-effective conduction of experiments in the stratosphere. KSat-internal projects are flown (e.g. components test for small satellites) as well as external payloads.

The helium-filled balloon is launched here in Stuttgart and reaches an altitude of 30 km after approx. 90 min. During the flight the ambient temperature drops down to -60° C. After the burst of the balloon due to low ambient pressure (approx. 10 mbar) BUBBLE floats down to the ground on a parachute. There the balloon gondola is recovered by our chase cars. 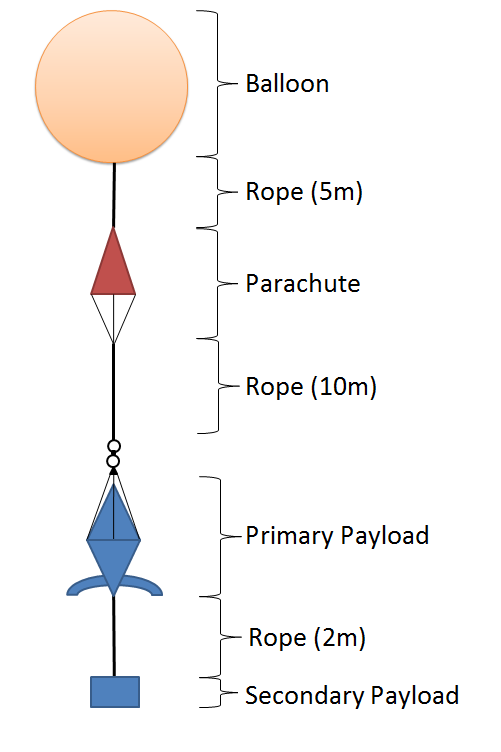 To enable a fast and reliable recovery of the gondola, its position is transmitted to the ground stations via a two times redundant system. Additionally, payload data can be sent. The payload is also supplied with energy and protected from the low temperatures, if needed. The maximum payload mass is usually 1 kg.

If you are interested in launching a payload on BUBBLE, please do not hesitate to contact us at:

Below, the previous BUBBLE-missions are listed.

The payload of BUBBLE 1 is build by the Institute of Space Systems (IRS) at the University of Stuttgart. It consists of two sensors, which measure the brightness of the sky. The measurement is conducted during daytime to capture the decrease of scattered light during ascent of the balloon. Put differently: How black is the sky at 30 km altitude?

Why is that interesting? The Institute of Space Systems is leading the project ESBO DS. It is a design study for a balloon-based telescope. Due to the telescope's high operation altitude of 30-40 km, atmospheric disturbances during observation are minimized. At the same time it is not nearly as expensive as a space telescope. Furthermore, for balloon telescopes the volume restrictions of rocket payload fairings do not apply. Therefore, larger mirror diameters are possible. For the ESBO DS project the data concerning intensity of scattered light is of high importance.

One of the two sensors on BUBBLE 1 is a simple brightness sensor (basically a one-pixel camera). A cone-shaped baffle minimizes direct solar irradiation. Therefore, only the scattered light is measured. The other sensor is a Raspberry Pi camera, which has a larger field of view. Its pictures can later be compared to the data of the brightness sensor. Both sensors are tilted up 30° with respect to the horizon. The data is stored on on-board memory and read out after touchdown. 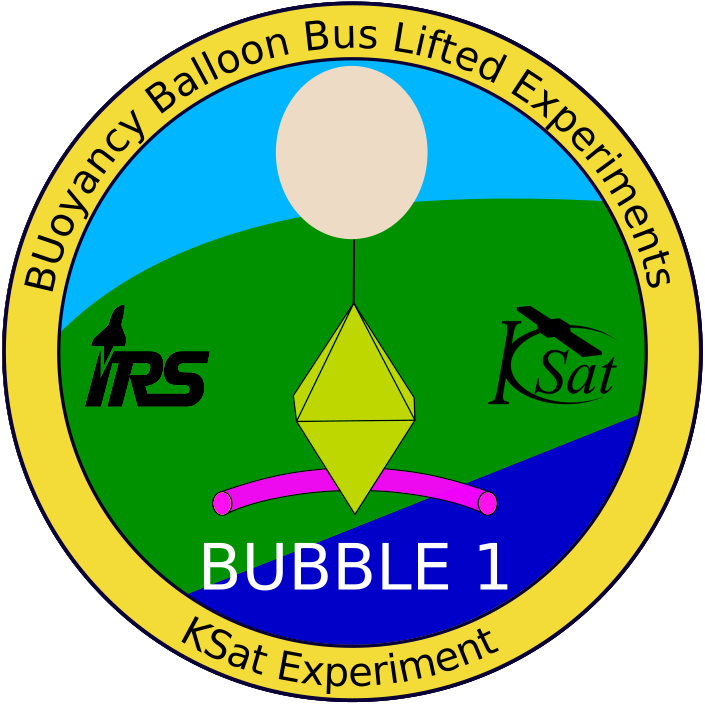 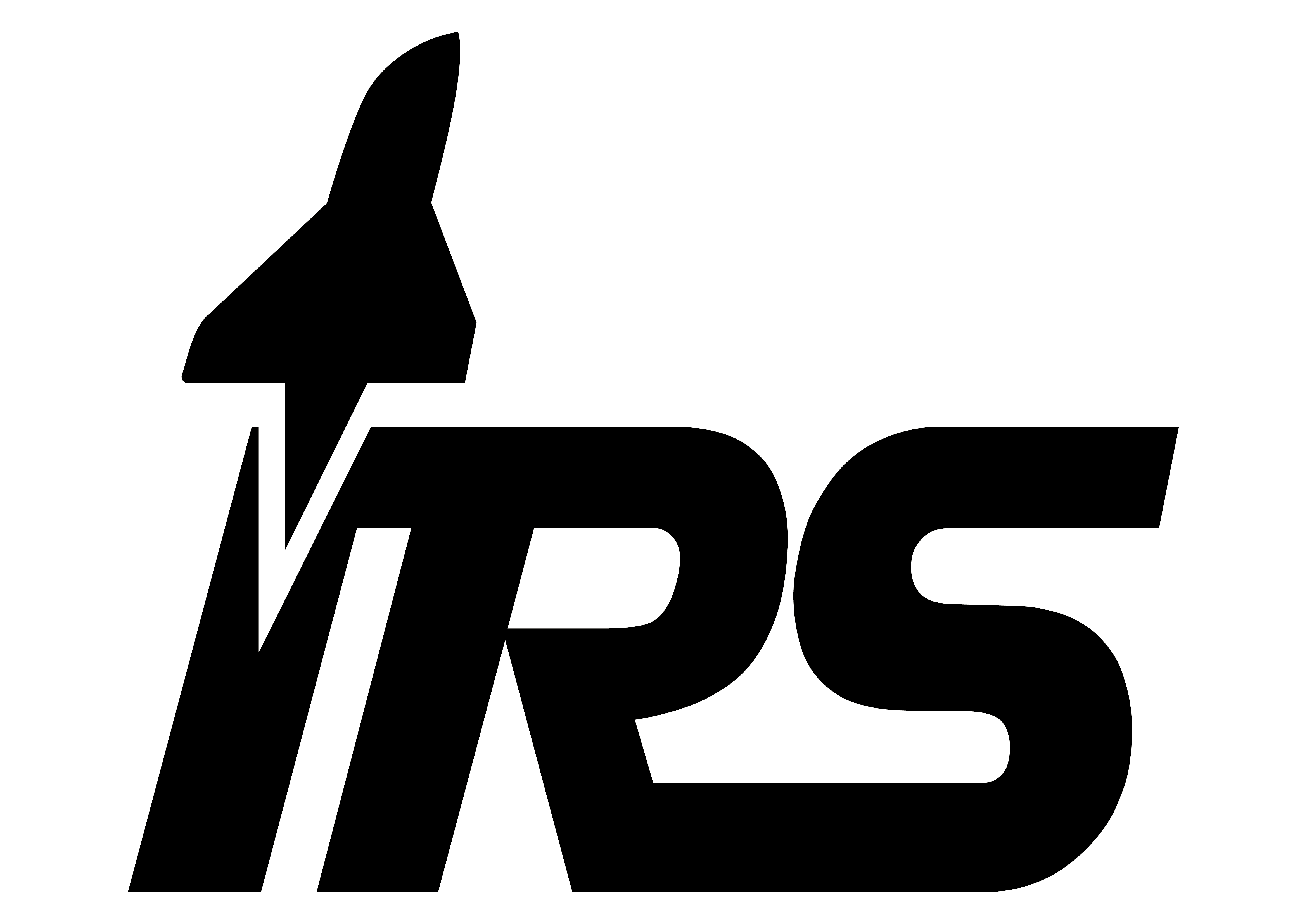 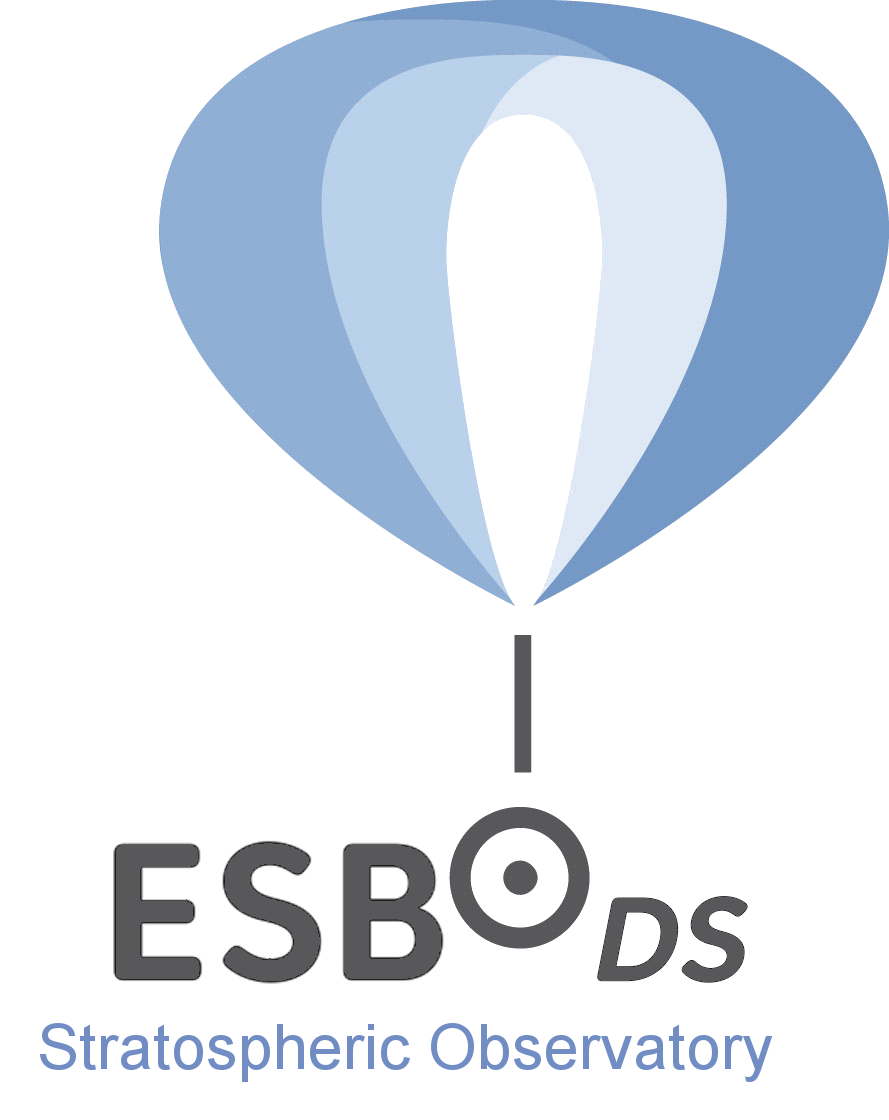 The gondola consists of two pyramids with square bases. It is designed to allow for the 30° tilt of the sensors. The pyramids are assembled out of carbon rods, which are held together by 3D-printed plastic corners. For thermal insulation the walls are covered with styrodur. The common base of the pyramids is a plastic plate, which holds all other components. The gondola is suspended at the corners of the base plate and at the top via strings. 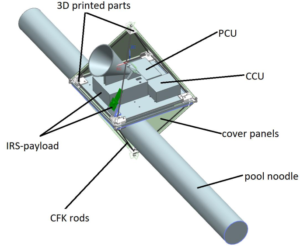 Inside the upper pyramid the central-computer-unit (CCU) is located alongside with the payload. The CCU is a Raspberry Pi with a Pi-in-the-Sky expansion module. It communicates with the payload-computer-unit (PCU) via Ethernet over USB. Furthermore, a GPS-antenna and an antenna for communication with the ground stations are connected to the CCU. The latter one is mounted at the bottom corner of the gondola. Additionally, a Iridium module with another GPS-receiver is located in the upper pyramid. It sends position data to the ground stations via the Iridium satellite network. 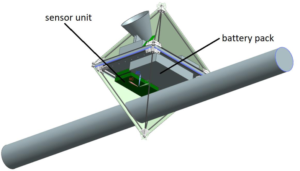 At the lower pyramid a pool noodle is mounted, which increases the moment of inertia and the air resistance to rotation. Therefore, the rotation rate of the gondola is minimized. Additionally a battery and a sensor unit with accelerometers, gyroscopes, a pressure sensor, a temperature sensor and a magnetometer are located in the lower pyramid.

Below the gondola a reprogrammed radiosonde (RS41) is suspended via a string. It serves as further redundancy and transmitts the current position to the ground stations while beeing powered by its own battery. In the figure the radiosonde is labeled as secondary payload.

The Flight of BUBBLE 1

BUBBLE 1 was launched on 22nd of January 2019. The balloon reached the minimum altitude of 30 km and burst at nearly 35 km. Additionally, the ascent velocity was almost exactly 5 m/s, just as planned. The parachute opened and BUBBLE 1 could be recovered just half an hour after touchdown in a forest near the village of Bad Boll, some 40 km distant of the launch site. The parachute had to be left behind in the trees.

Sadly, not much data was recorded by the payload. The reason is a software problem at the interface of PCU and CCU. Also, the interior of the gondala got very cold. For the next flight the insulation must be improved, although there were no cold-induced failures. According to gyroscope and accelerometer data the rotation of the gondola was higher than expected. The aerodynamics of the gondola need to be improved as well. Additionally, oscillation of the gondala should be reduced (e.g. with a longer string).

The Iridium module had to be deactivated before launch due to instabilities in the software. CCU and sensor unit performed as expected. But the GPS-receiver of the CCU was blocked at an altitude above 12 km. The radiosonde operated reliably. It was important to have three independent telemetry links, because only one could finally be used without interuption.

A GoPro, mounted above the gondola, recorded approximately the first half of the ascent, then the battery died. That was expected, because the camera was installed just a short time before launch and had no additional battery or good thermal protection.

But all systems of the gondola did not suffer damages and can be re-used.

Due to problems in the software on BUBBLE 1 only a few payload data points could be recorded. Therefore, the same payload will be flown again.

Next to the mitigation of those software problems the mechanical structure of the gondola was improved as well. A better thermal management and aerodynamic properties are part of that. Also, the shielding of electrical components has been reworked to reduce electromagnetic interferences.

Two additional payloads are flown onboard BUBBLE 2. A LoRa module for testing two-way communication and an Iridium module for telemetry downlink via satellite.

BUBBLE 2 had a successful flight on the 17th of June 2021. For a short report of the launch see here. After the flight data is analyzed, this page will be updated with more details. But you can already watch the whole flight from the on-bord-perspective: 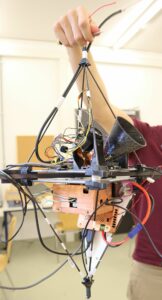 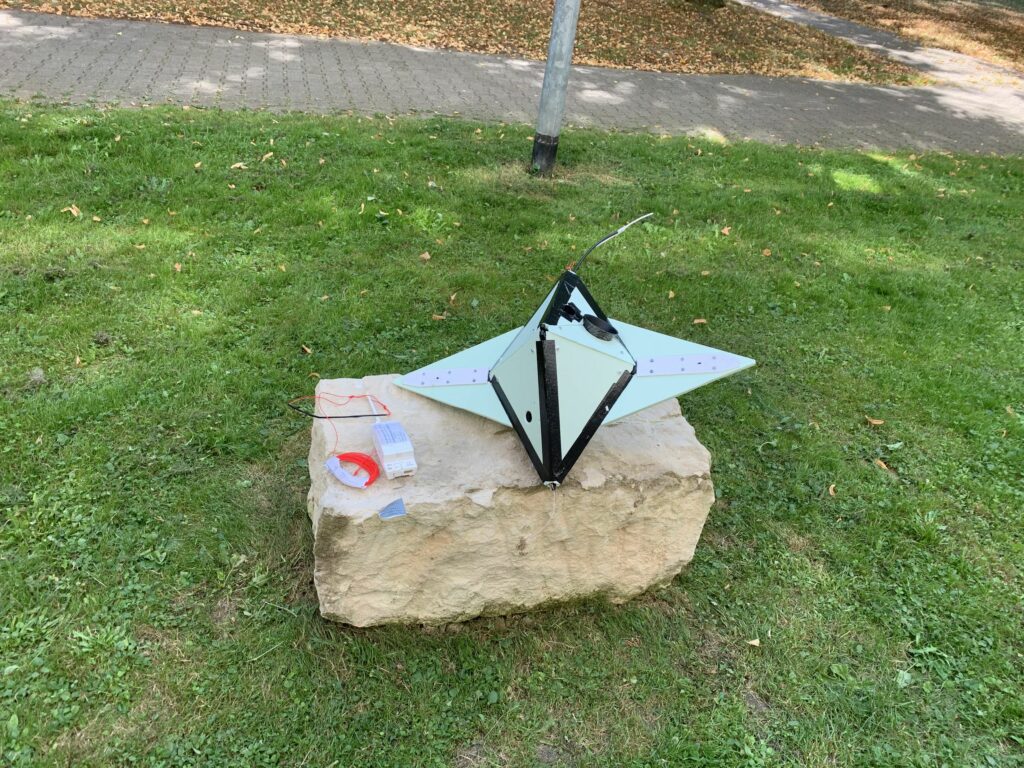 BUBBLE 2 during system-level test on ground

For the third iteration of BUBBLE, we use a completely new gondola design, that will be easier to assemble than the double-pyramid shape of the previous missions. Its shape will be a cuboid with attached fins for passive stabilization in the air stream. Internally, an adaptable rack system is planned to accomodate payloads of different shapes and sizes. Also, external payloads will be possible.

The payloads will include:

Because our previously on-board computer is no longer available, we will use a new one. Also, we will improve the Power Control and Distribution Unit (PCDU) to make payload power supply switchable and add more sensors for power monitoring. The communication systems will be LoRa as main communication up- and downlink, Iridium for high interval telemetry downlink and a Software Defined Radio (SDR) for monitoring the radio environment in the stratosphere and as basis for further radio experiments in the future.

The launch of BUBBLE 3 is also planned for summer 2021. 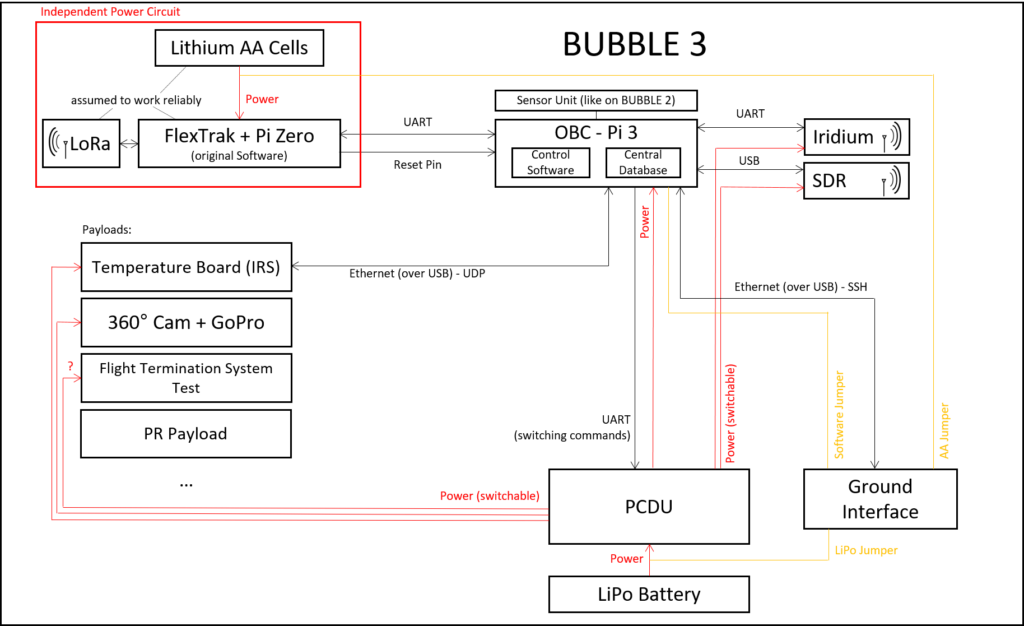 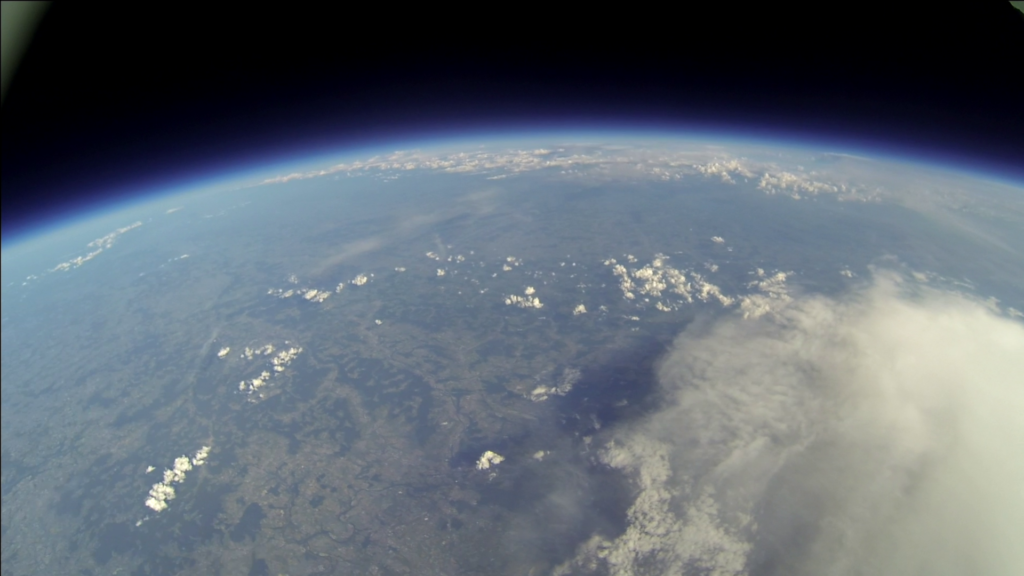 On June 17, 2021, the long-awaited day had come, BUBBLE 2 could finally launch after a year’s delay due to Corona! 30°C outside temperature in Stuttgart and the team gathered,... 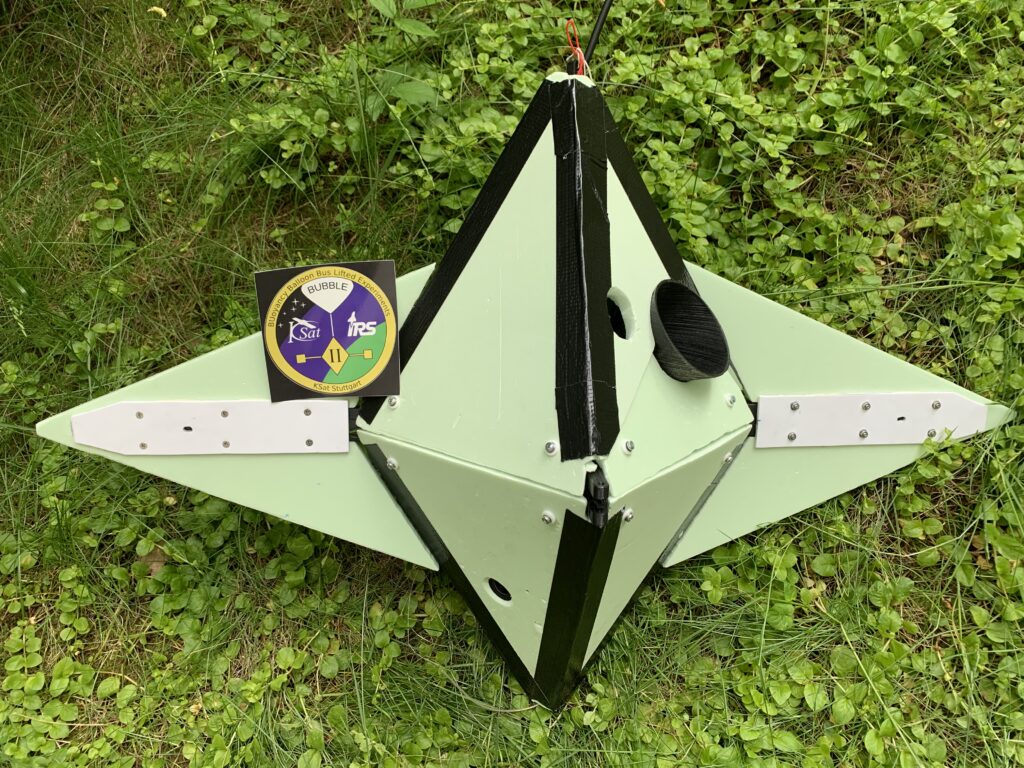 As temperatures are rising, and winter winds are finally gone, BUBBLE 2 has successfully performed its system test – a critical milestone in the launch preparations. During the 2.5 hour... 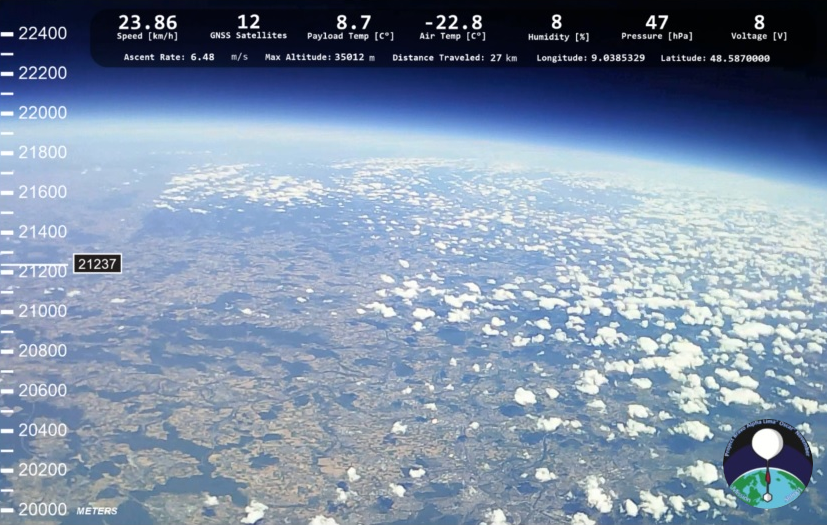 The BUBBLE team practised for their upcoming launch today by helping to track and recover another private high altitude balloon. The payload was a camera, along with a few personal... 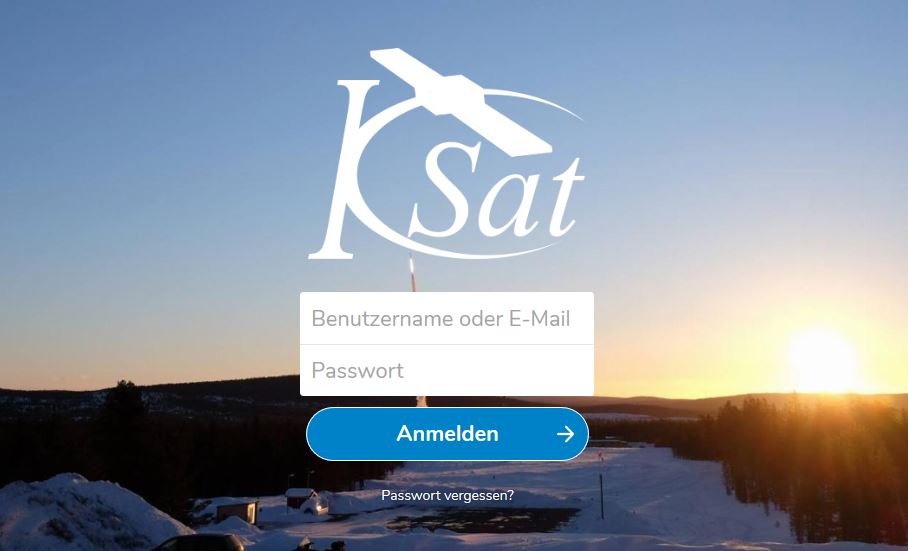 Corona and the impact on KSat projects

Corona and the impact on KSat projects

The corona virus currently leads to massive restrictions in public life in Germany and Europe. The University of Stuttgart will close down almost completely until 20 April 2020, which will... 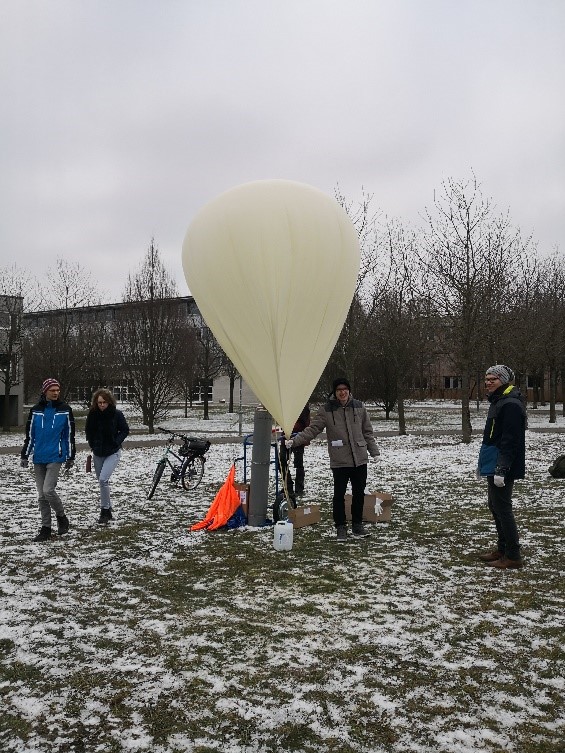 22nd January 2019 – BUBBLE 1, the first high-altitude research balloon of the Small Satellite Student Society of the University of Stuttgart, is finally ready to launch. 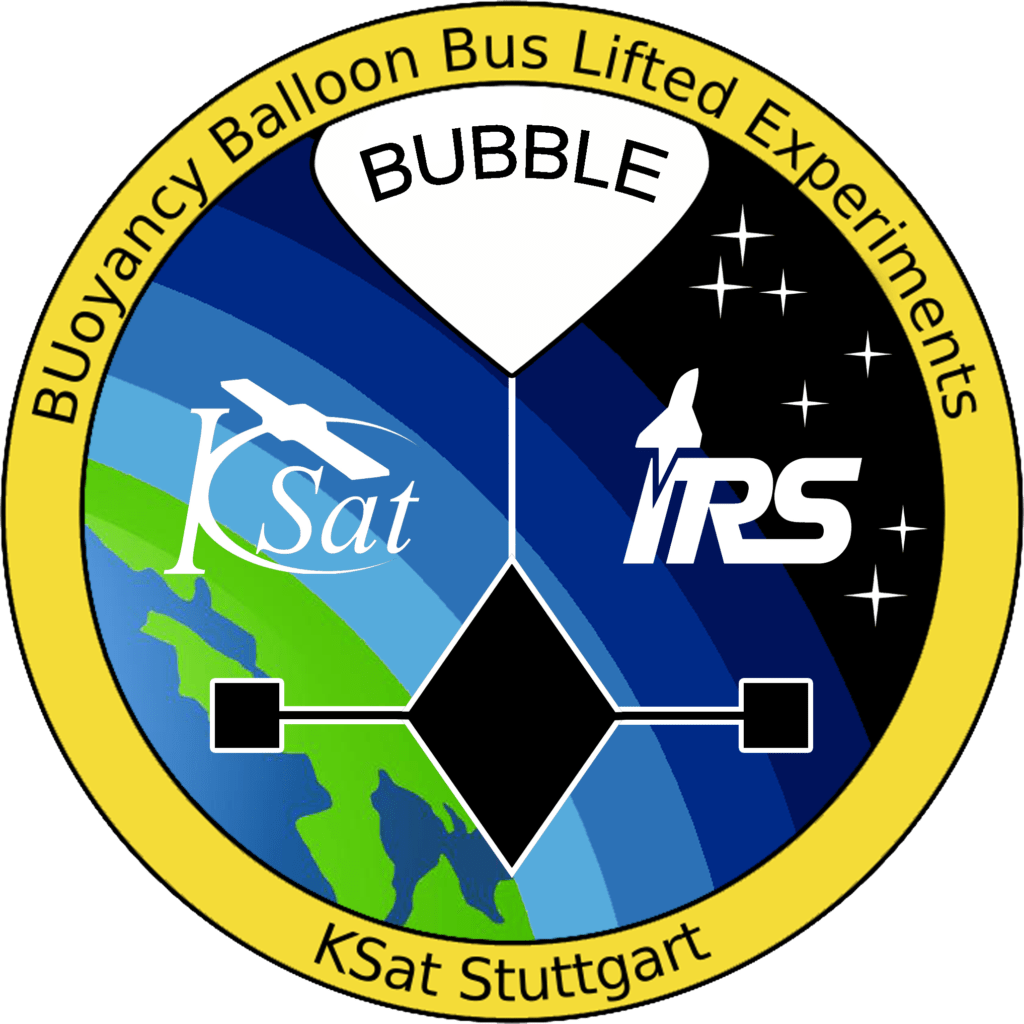 BUBBLE (BUoyancy Balloon Bus Lifted Experiments) is our high altitude balloon program. We provide the bus system for the gondola to fly various payloads from KSat and external payloads. The...

The Institute for Photovoltaics (ipv) at the University of Stuttgart supports BUBBLE with their expertise as well as financially.