PAPELL is a technology demonstrator experiment that is meant to carry on one of the research topics of Steve Papell. Steve Papell was a NASA scientist, who in 1963 had the idea to pump rocket fuel with the help of electromagnetic fields. Therefore, he invented a so called ferrofluid - tiny ferrite particles emulsified in oil or water – and a respective pumping mechanism.

The project team, consisting of members of KSat, revisits this concept and aims to demonstrate a general pumping mechanism. In early 2017, the participation in the High-Flyer student contest - "Überflieger" - of the German Space Administration DLR started and consequently, PAPELL was chosen as one out of three teams to send the experiment to the International Space Station (ISS). More on the High-Flyer student contest is written below.

The overall hull has a total size of 10x10x15 cm^3 and contains two areas in which the actual experiment takes place. The first area pictures an array of electromagnets and is supposed to demonstrate the feasibility of moving ferrofluid in microgravity. In a second stage, the aim is to find out whether it is possible to separate a single drop of ferrofluid within the magnetic field and merge them back together again.

In the second experimental area, it is to be examined if and how solids can be transported through a pipe system by using ferrofluid. The solids are implemented in the form of coloured beads which are, in a later stage of the experiment, aimed to be separated by colour. To this end, the pipe system contains a bifurcation, which is, through a specific programming of the ferrofluid motion, supposed to act as a separator.

Operations on the ISS

On June 26, 2018, PAPELL launched to the ISS with a Falcon 9 rocket (SpaceX-15) from Cape Canaveral. For this, a part of the PAPELL team traveled to the USA to watch the start live.

Shortly after, PAPELL was installed and put into operation. The PAPELL team quickly established the first contact with the experiment. The operability was verified by self-tests of the hardware components. Ferrofluid is now in Experimentatal Area 1, where individual droplets are transported. 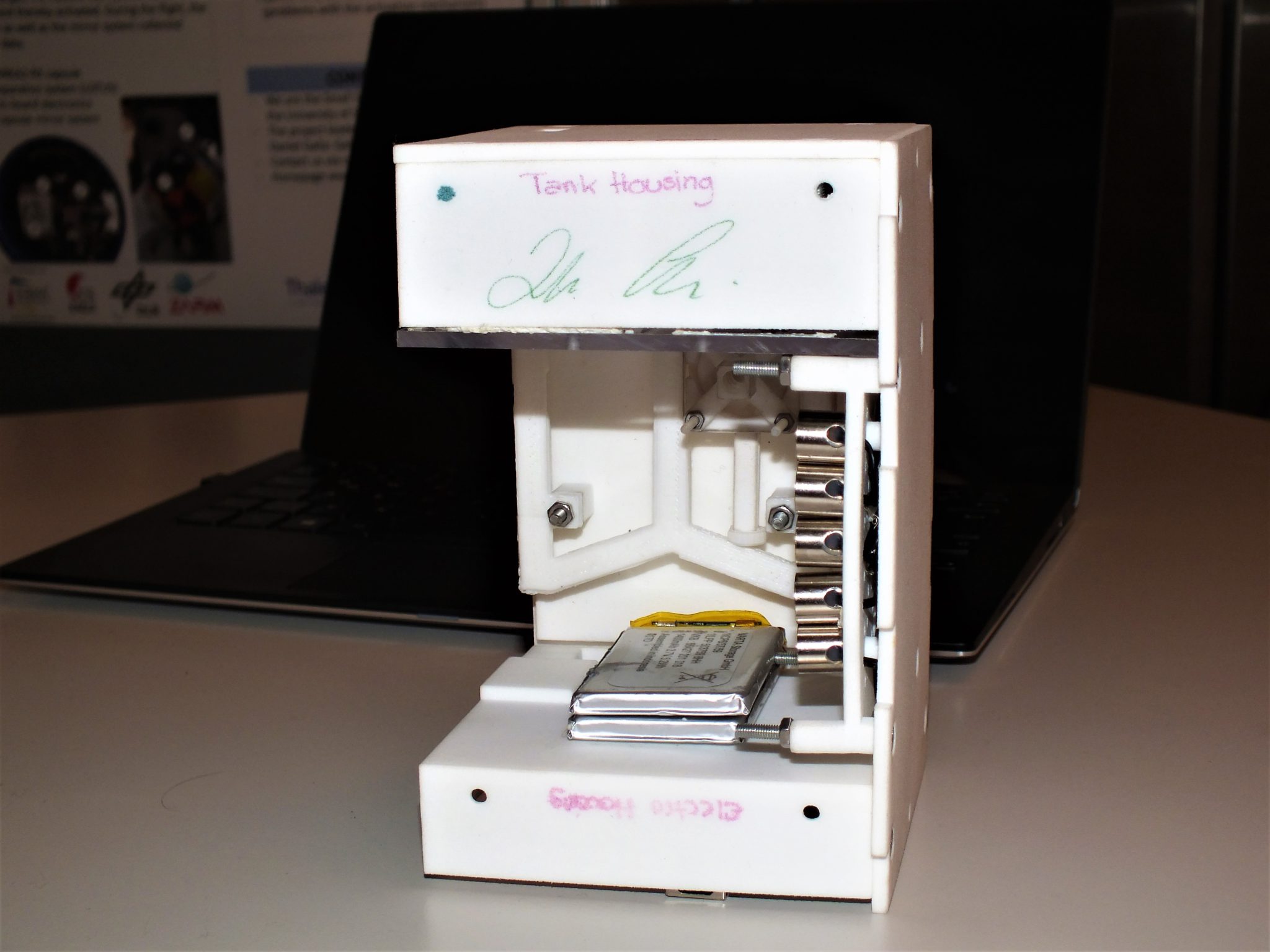 From Assembly to Orbit

The High-Flyer competition, organized by the DLR, provides student teams from Germany the opportunity to design their own experiment and send it to the ISS for operation. In orbit, the experiments are supervised by ESA astronaut Alexander Gerst. Out of all applicants, the teams of the eight best proposals were selected by the experts and invited to present their experiment ideas at the selection workshop of the DLR Space Administration in Bonn. In the end, a total of three student teams were chosen to run their experiment on the ISS. Additionally, after completion, the students were given the opportunity to watch the launch of their experiment live on site.

The members of the student small satellite society of the university Stuttgart “KSat e.V.” proposed two experiments (PAPELL & STELLA) of which PAPELL was accepted and is now under development.

“Pump Application using Pulsed Electromagnets for Liquid reLocation” (PAPELL) is an experiment that aims to show the functionality of a ferrofluid pump in micro gravity.
The term "ferrofluid" describes a fluid which, under the influence of a magnetic field, acquires magnetic properties and can thus be manipulated by using magnets. The pump itself works without any moving components and instead uses the interaction between the ferrofluid and electromagnets. Through specific activation and deactivation of the electromagnets, the ferrofluid drops can be moved in different ways both over a surface as well as through a pipe system. In the meantime, the dynamic process will be observed by cameras for later analysis. Furthermore, the pump is meant to show its capability of transporting other particles such as solid bodies. Therefore, solid bodies are inserted into the pipe system and transported by the motion of the ferrofluid. With the aid of the experiment, the goal is to examine the functionality of such a ferrofluid pump and its possibility for application in future space projects. One possible application might be an innovative air conditioning system that is operating without using ventilators and thereby produces less noise. Hence, it is expected that the amount of noise induced stress straining astronauts is significantly reduced.

STELLA is meant to serve as a technology demonstrator on the ISS, based on the 3D printing process called stereolothography.
The idea is, to irradiate light sensitive resin with an RGB or UV laser and thus harden it. In doing so, a solid 3D stucture evolves, layer by layer. Apart from fundamental tests in microgravity, in which an examination of the material properties takes place, fine structures are also aimed to be produced. The goal of the experiment is to serve as a basis for so called "tissue engineering" (cultivation of fabric, in this case, in the form of 3D printed synthetic matrices). By this means, it would contribute both to research as well as support on long-term missions in space and also be able to be used for the production of very lightweighted components. During the development process of the project, a heavily miniaturized stereolithography printer is constructed, for which it is drawn on as many comercially accessible components as possible. Corresponding to the High-Flyer competition standarts, the whole construction is required to fit into a storage room of 1,5 U (10cm x 10cm x 15cm). 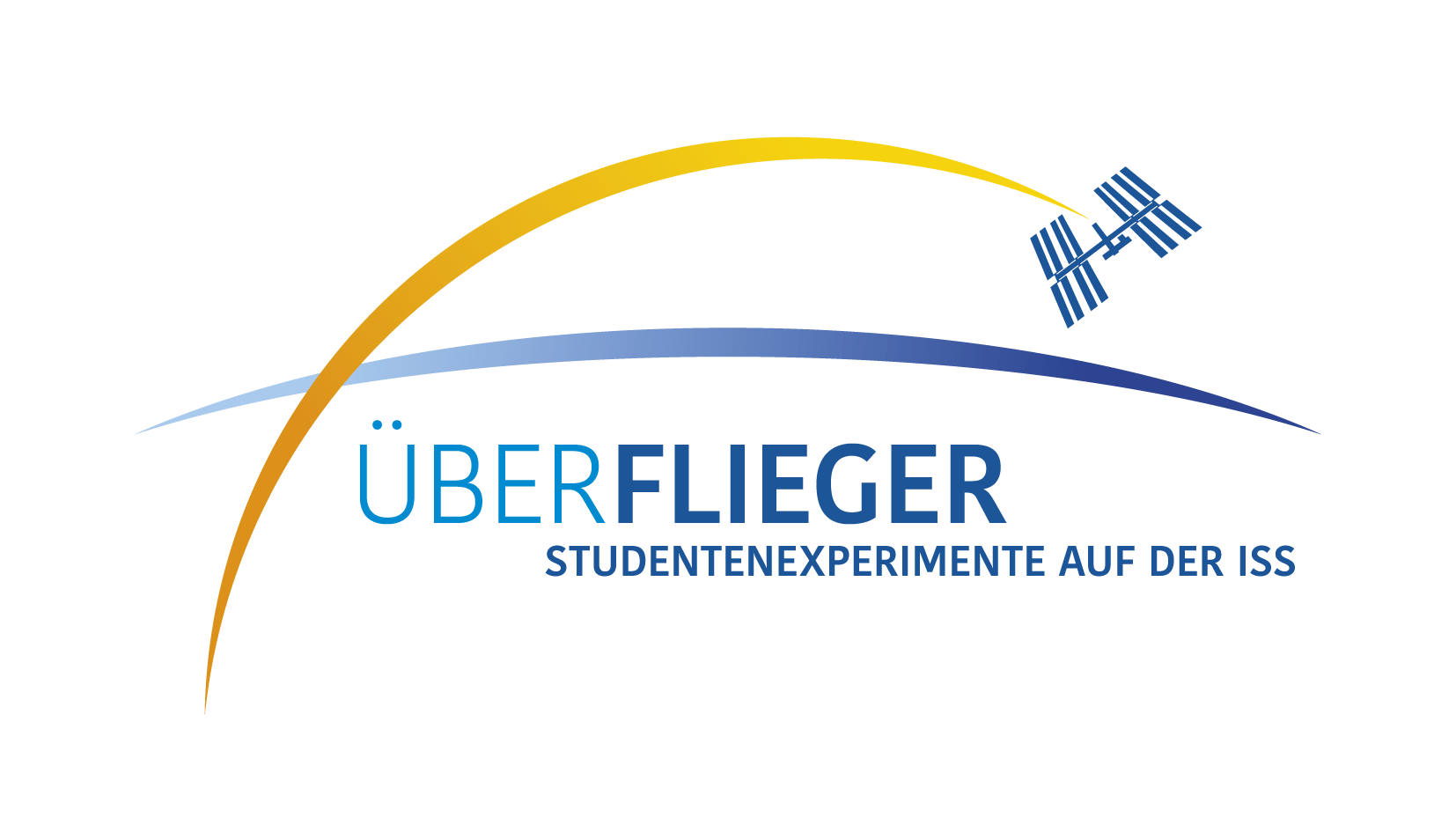 The Neptun Labratory from the Karlsruhe Institute of Technology (KIT) is soporting us with fluropor, the impregnation for both experiment arreas.

The company Mannel Magnettechnik GmbH sponsored the electromagnets for our project.

He Space has supported us with supportive fundings.

The company Jomatik GmbH sponsored us with 3D printed components.

Inovation in Miniature, The Lee Company is sponsoring us one valve for our Ferrofluid system.

The company Bartels Mikrotechnik GmbH supported our project with discount over 100€.