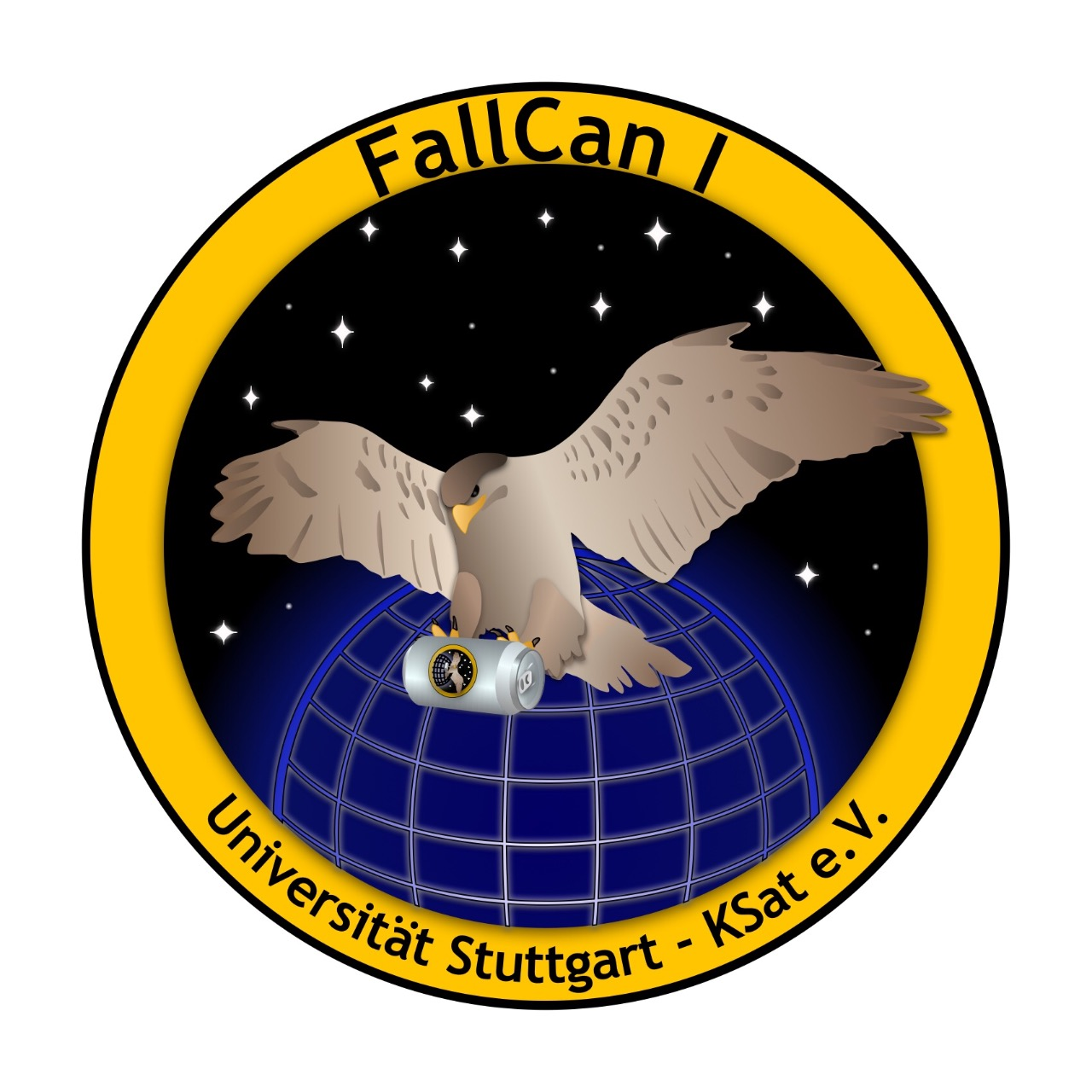 The FallCan I is our entry into KSat’s 2017/18 CanSat-Challenge. It has the shape and size of a 330ml softdrink can and is designed to land with as little impact speed as possible after a drop from about 300m altitude, without using a parachute.

The aerodynamic breaking system is inspired by the maple seed. After being dropped from the carrier system (a drone or a rocket) the FallCan will deploy six angled arms. Strung between them are three pieces of plastic foil, which form three angled surfaces. As the CanSat falls towards the ground the airflow against these will spin it around its axis and slow it down to a relatively low impact speed. The rotation also leads to a very stable attitude in flight.

The arms are stowed on the side of the CanSat during ascent up until it is dropped. At its top they are loaded with rubber bands which immediately deploy them after they are released. A string wound around the base of the FallCan holds them down until the deployment command is issued from the on-board microcontroller. At that time a small glow plug is heated and cuts the string, releasing the arms, which then start to slow down the CanSat’s descent.

During the flight measurements of altitude and acceleration are recorded for post-flight analysis. For this and to command the deployment of breaking surfaces the on-board electronics consist of an Arduino microcontroller, pressure sensor for altitude measurements, accelerometer, SD-card module, glow plug and lithium-polymer batteries.

After finishing the CAD-Model in mid-April we printed a first prototype of the whole CanSat on a consumer grade 3D-printer belonging to one of our team members. We were able to test the deployment mechanism, both manually and commanded by the on-board electronics. We also performed several drop tests of the prototype, validating the FallCan’s aerodynamic properties and even testing the deployment of the arms.

At the beginning of May we received the parts for our flight model, which were professionally 3D-printed by our Sponsor Jomatik. After assembling them to a fully functional flight model we then performed many tests to validate its performance, particularly the reliable deployment of the breaking surfaces. First we performed manually triggered tests where we just cut the string holding the arms down by hand. Later we simulated the descent by taking the CanSat into an elevator, causing the electronics to sense a decrease in altitude, similar to what it would measure in flight, and deploying the arms. All these tests were successful, validating the FallCan’s flight readiness.

On the 16th of May we had our Flight Acceptance Review. We presented our progress and the finished CanSat to a panel of experts from the University of Stuttgart’s Institute of Space Systems and experienced members of KSat. After our presentation and an intensive Q&A-session, the FallCan was officially approved for flight. We are very excited to have passed this milestone and are now waiting for a launch date in the next couple of months.

The launch of the CanSat Challenge 2017/18 took place on the 28th of August 2018. The FallCan was brought to a height of 340m by a drone and then dropped. The big question was whether it would successfully extend its rotor foils. How the flight went can be seen in this video:

Directly after the drop the CanSat extended its foils and began to rotate. As planned the foils slowed it down and it took a full 38s until it reached the ground. After landing we were able to collect it and were very happy to see that it had taken absolutely no damage. We were then able to remove the SD card and examine the flight data. As the only team we were able to record the whole flight, including the impact. All in all the flight was a great success.